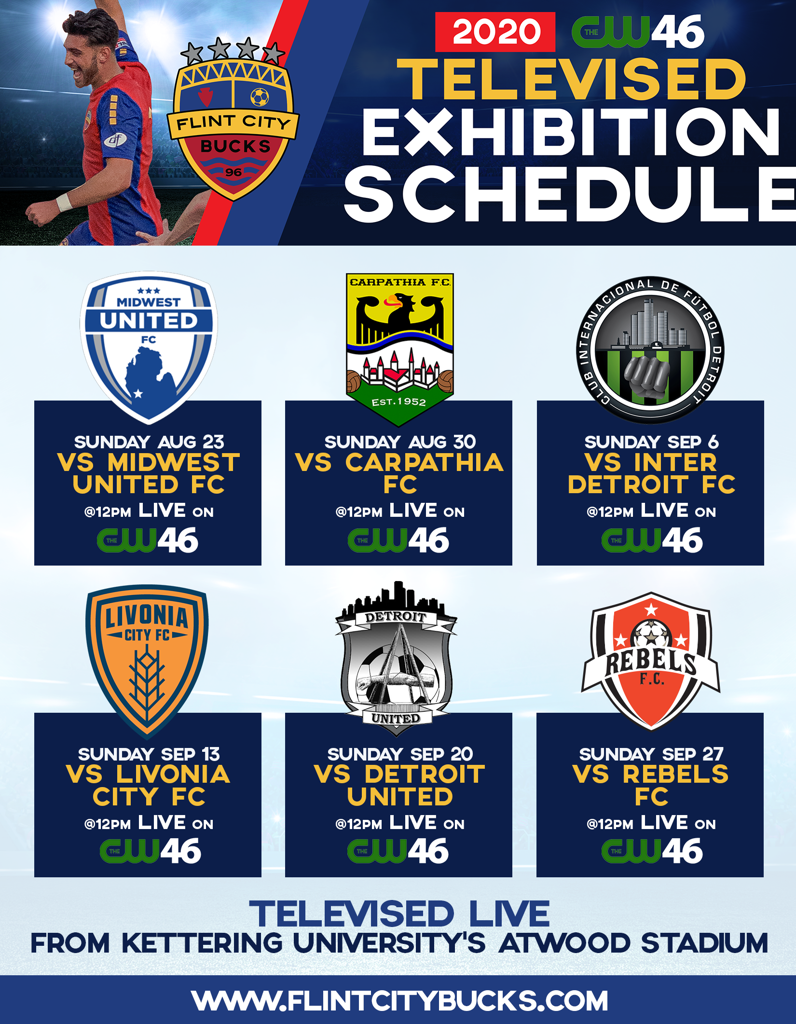 The CW46 to broadcast matches live throughout Mid-Michigan on Sundays

Flint, Mich. - The Flint City Bucks, 2019 USL2 National Champions, announced today that they have partnered with The CW46 (WBSF) from Flint, Michigan to televise live Flint City Bucks exhibition soccer matches over the course of the next six consecutive Sunday afternoons.

The first live telecast will be this coming Sunday, August. 23 from 12 noon to 2 p.m. (ET) and will feature the Flint City Bucks hosting Midwest United FC at Kettering University’s Atwood Stadium in Flint.

Because of the state's Executive Order and health and safety regulations related to live sporting events, fans will not be permitted to attend these matches.

Bucks Chairman, Dan Duggan remarked, “Special thanks to the team at The CW46 who worked extremely hard to make this possible. We know our fans have struggled like everyone else over the past five months. We were all looking forward to celebrating the defence of our national title together at Kettering University’s Atwood Stadium. With no fans allowed in attendance, this is the next best opportunity for our supporters to keep up with the team, the status of our college and professional players and how our 2021 season is shaping up. I hope that everyone will tune in to listen to our long time broadcast team of Neal Ruhl and Gary Parsons, live, starting this Sunday afternoon from 12 noon to 2 p.m.”

Bucks fans in Mid-Michigan can find The CW46 (WBSF) on the following local TV channels:

Additionally, fans outside of the Mid-Michigan viewing area will still have the opportunity to watch the Bucks online as the team will be simulcasting the game live on their HD YouTube channel, website (www.flintcitybucks.com) and Twitter account.

Bucks President, Costa Papista added, “We are thrilled to be able to offer a live broadcast television event to our players, sponsors and fans in 2020.  It’s an amazing opportunity for our team in these extremely challenging times.  We appreciate our partnership with The CW, Kettering University and the tremendous support of our sponsors to make these live broadcasts a reality throughout Mid-Michigan.”

WBSF, branded The CW46, is The CW-affiliated television station for the Flint/Tri-Cities market that is licensed to Bay City, Michigan.

Attached to this release is a coverage map where The CW46 is available throughout Mid-Michigan.

Bucks on TV 2020 Charity Partner:  The Greater Flint Urgent Fund was established by the Community Foundation of Greater Flint in partnership with United Way of Genesee County. The fund awards grants on a regular basis to nonprofits that are addressing gaps that are surfacing in key services for our most vulnerable community members. The Community Foundation and United Way work to ensure the fund has maximum scope and impact.  Bucks Fans, if you’re able, please text FLINTBUCKS to 41444 to make a contribution today.  For more information visit www.cfgf.org

About Flint City Bucks Soccer:  The Flint City Bucks are the most successful franchise in the history of USL League Two.  The Bucks won their 4th North American Championship in front of a USL2 record breaking crowd of 7,198 fans at Kettering University’s historic Atwood Stadium on August 3, 2019. 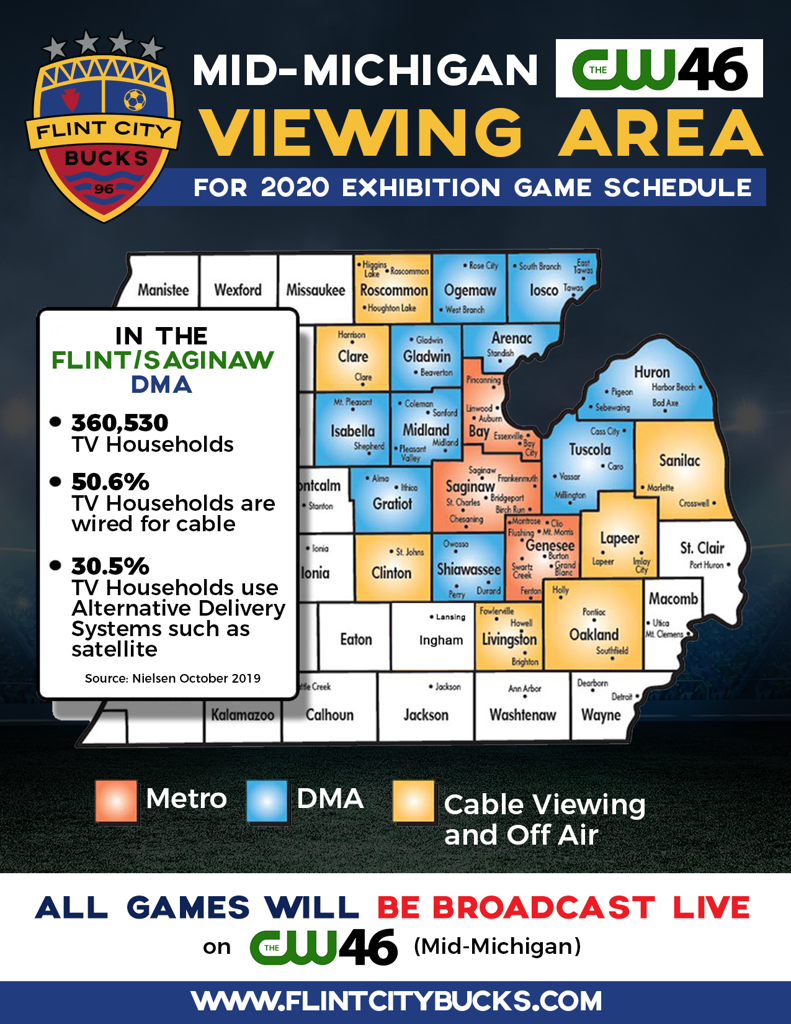