HAIFA, Israel - Since arriving at Israeli club Maccabi Haifa earlier this year, striker Frantzdy Pierrot has been nothing short of spectacular for the side.

He had just played a three-year stint with Guingamp, in France's Ligue 2, when he got the opportunity to play in Israel's top flight.

He's almost exclusively played in UEFA Champions League qualifying matches for the club since joining in July, save for a substitute appearance in the Israeli Super Cup. In that time, he's scored five goals in the Champions League Qualifiers. In the second round of qualifiers, he put in two goals just four minutes apart to advance past Greek powerhouse Olympiacos.

Tuesday night, he continued his dominant run for Maccabi Haifa against defending Serbian SuperLiga champions Red Star Belgrade. Pierrot was the starting striker in the match, and got to work quickly.

In the 18th minute, a Haifa chance led to a scramble in the 6-yard box. The ball fell to Pierrot's feet with his back to goal, and he turned around a defender before firing it into the back of the net to give Haifa a 1-0 lead. Red Star Belgrade scored twice in the 27th and 39th minutes to carry their lead into halftime.

At home, and needing to avoid a dangerous loss, it was Frantzdy Pierrot to the rescue once again in the 51st minute. An early cross was whipped in from the left side, and Pierrot was able to get a head to it and steer it in past the keeper.

Tjaronn Chery added the third Maccabi Haifa goal to take the lead for good in the 61st minute, and the Israeli side are one match away from making it into the Champions League group stage, among some of the best clubs in the world. Pierrot was substituted off with 20 minutes to go in the match.

With a win or a draw in the second leg of the playoff, Pierrot and Maccabi Haifa will advance to the UEFA Champions League group stage. 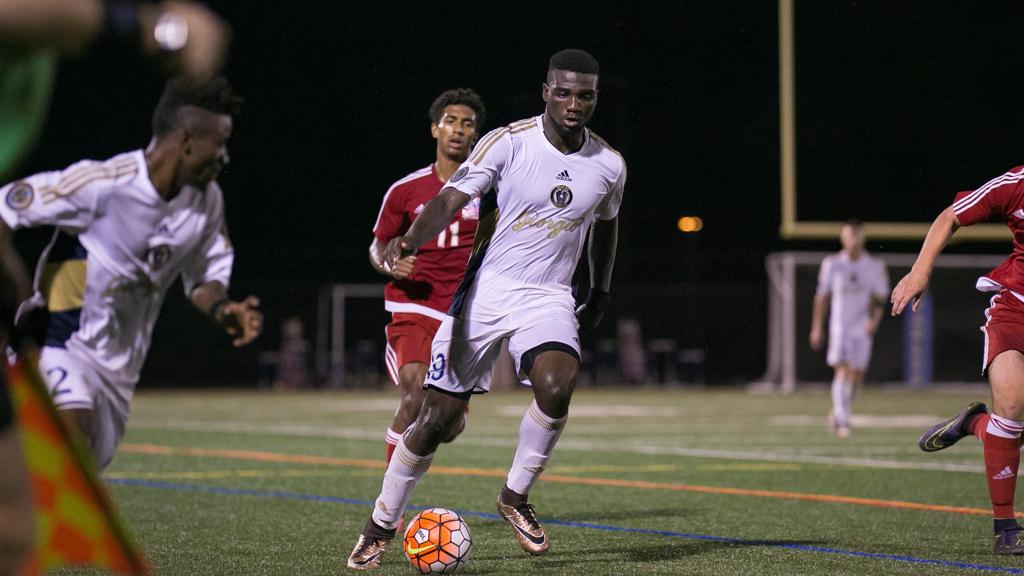 Frantzdy Pierrot with Reading United AC. He played 22 matches for the side between 2016 and 2018, scoring 12 goals.